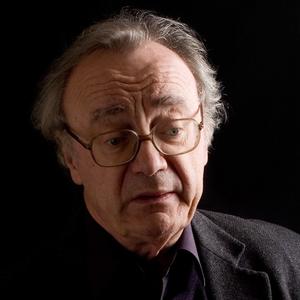 Alfred Brendel studied piano and composition in Zagreb and Graz, completing his piano studies with Edwin Fischer, Paul Baumgartner and Eduard Steuermann. For 60 years he has enjoyed a distinguished international career concentrating on the works of central European composers from Bach to Schoenberg as well as featuring many works by Liszt. He was the first pianist to record Beethoven’s complete piano works, and was highly influential in getting Schubert’s Piano Sonatas and the  Schoenberg Piano Concerto recognised as integral parts of the piano repertoire. He has performed regularly at the world’s musical centres and festivals, and with the leading orchestras and conductors, and his extensive discography has contributed to making him one of the most respected artists of our time. His final concert appearance was with the Vienna Philharmonic on 18 December 2008. It was released on CD, together with his last solo recital, by Decca.

He has received honorary degrees from many universities including Oxford, Cambridge, Yale and McGill, and was awarded an honorary KBE in 1989. In 1992 he received the Hans von Bülow Medal from the Berlin Philharmonic and was granted Honorary Membership of the Vienna Philharmonic Orchestra in December 1998. In 2001 he was recipient of the “Lifetime Achievement” awards at the MIDEM Cannes Classical Awards, Deutscher Schallplattenpreis, and the Edison Awards in Holland, as well as of the “Beethoven Ring” from the Universität für Musik und darstellende Kunst in Vienna. He has received the Leonie Sonning Prize, the Robert Schumann Prize, the 2002 South Bank Show Classical Music Award, as well as the 2004 Ernst von Siemens Prize, the 2007 Venice Rubinstein Prize “A life for music”, the 2008 Karajan Prize, the 2009 Praemium Imperiale in Tokyo, the 2010 Gramophone “Lifetime Achievement” award, in 2011 the Franz Liszt Ehrenpreis, and the Juillard Medal as well as the Golden Mozart Medal of the Salzburg Mozarteum in 2014. Two boxsets have been released that contain most of his recordings: “The Complete Vox: Turnabout and Vanguard Solo Recordings” (2008) with 35 CDs and “The Complete Philips recordings” (2015) with 114 CDs that also contains several live recordings.

Alfred Brendel’s writings include the collections of essays Musical Thoughts and Afterthoughts, Music Sounded Outand Alfred Brendel on Music. His collected poems appeared in German, English, French and Spanish. Most recently, The Lady from Arezzo: My Musical Life and Other Matters was published by Faber.

Alfred Brendel gave lectures, poetry readings and chamber music master classes at the Salzburg and Verbier festivals, Vienna Musikverein and Konzerthaus, Wigmore Hall in London, at the Philharmonie de Paris and in venues dedicated to music across Europe. His activities in North America took him to The Juilliard School, New York University, CAL Performances at Berkeley, McGill University in Montreal, Harvard, Princeton and Yale. He was visiting professor at Cambridge. Bärenreiter recently published his conversations on interpretation with Peter Gülke. He devotes a significant part of his time to sharing his experiences as a musician with a younger generation of artists. Some of his lectures have been recorded by Unitel and Supraphon.

All pianists and cello&piano duos who successfully applied for the 7th ClaviCologne Masterclasses and Academy and who wish to participate in Mr Brendel's workshop have time till the 6th of March 2022 to provide the organizers with a link of their performance:

These pieces are on the programme of the open master class with Alfred Brendel.

The video recording should be uploaded on one of the commonly used video-sharing websites such as Youtube, Vimeo and so on. Please, send the link to the following e-mail address: festival@eufsc.eu

Based on the recording, the organizers will choose four candidates who will receive the opportunity to take part in Mr Brendel's open master class. The results of pre-selection will be announced on the 14th of March 2022.

Moreover, everyone is also invited to attend the lecture of Alfred Brendel in the framework of the Academy which is scheduled for the 15th of April 2022.