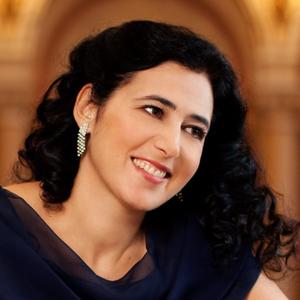 Milana Chernyavska, a German artist with Ukrainian roots. Looking back at her impressive career, she established herself as one of the leading pianists and pedagogues of our times. Her critics agree with Alfred Brendel, who wrote that “Happiness was complete when one listened to Milana Chernyavska”. Since 2009 she is a piano professor at the University of Music and Performing Arts in Graz, Austria. She is also a professor at the International Music Academy in the Principality of Liechtenstein and at the Reina Sofia Escuela Superior de Musika in Madrid. With her doctorate theses "The evaluation and pedagogical aspects of the theory of interpretation" she leads a discourse on insights from a perspective of musicology.

Milana Chernyavska is a sought-after teacher at international master classes as well as a jury member at various prestigious piano competitions, such as the ARD in Munich, the Busoni Competition, Telekom Beethoven Competition in Bonn, the Mozart Competition in Salzburg , the Santa Cecilia in Porto Competition or the Bluethner Goldaward in Vienna. Her students constantly win top prizes at important international competitions as Van Cliburn, Santander Paloma O`Shea, Ferruccio Busoni, Maria Canals, Vendome Prize at the Verbier Festival, Vladimir Horowitz and competitions in Los Angeles , Ettlingen, San Marino, Malta and many more.

As a soloist Milana Chernyavska performs with many renowned orchestras, while audiences and critics cheer for her solo recitals. In 2013 she played at the Ruhr Piano Festival, where she was awarded the prestigious Alfred Brendel Prize. Milana Chernyavska's discography contains more than 20 CDs which have been published with such world leading labels as Decca, Sony, EMI, and others. Her recordings received international prizes like the Diapason d'Or, BBC Music Award and Pizzicato Super Sonic Award. In 2014 she received Germany's most important media prize - the "Echo Prize", in the category "Classical without Borders". Apart from her solo career, Milana Chernyavska is a celebrated chamber musician. As a recital partner, she appears regularly with such artists as Julia Fischer, Lisa Batiashvili, David Garrett, Arabella Steinbacher, Sebastian Klinger, the Vogler Quartet, Maximilian Hornung, Daniel Müller-Schott, Susanna Yoko Henkel, and others. She founded the Milander Quartett, which has quickly developed into a sought-after ensemble and was described by the press as “four excellent instrumental soloists who have found each other in a perfect harmony” after the quartet’s debut in Munich Philharmonic.

At the age of seven, she played her first concert at the Philharmonic Hall in her native town of Kyiv. In 1990, she graduated with distinction from the State Tchaikovsky Conservatory, where Prof. W. Sagaidachny was her professor. This was followed by master classes with renowned teachers and famous pianists, including Alfred Brendel, Dmitri Bashkirov, Vladimir Krainev, Sergio Perticaroli, and Alexander Lonquich. In 1994 Milana Chernyavska received the most important award of her homeland, “Merited Artist of Ukraine”. From 1995 to 1998 she completed the master study of Prof. Margarita Höhenrieder and Prof. Gerhard Oppitz at the Munich Music Academy.