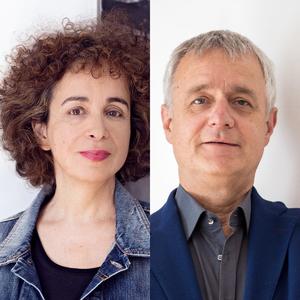 The Israeli pianist Yaara Tal and her German partner Andreas Groethuysen, after several years of mainly solistic activities, decided 1985 to team up as a duo. Since then, the duo is considered as one of the world’s leading piano duos and it has performed regularly at such prominent venues as the Concertgebouw Amsterdam, the Philharmonies Berlin, Cologne and Munich, Teatro alla Scala Milano, Elbphilharmonie Hamburg, Hongkong Arts Festival, Lucerne Festival, Frick Collection New York, Forbidden City Concert Hall Peking, Piano-Festival La Roque d´Anthéron, Klavierfestival Ruhr, Salzburger Festspiele, Musikverein Vienna, Tonhalle Zürich - to name only a few.

Their CD's have won the coveted “Preis der Deutschen Schallplattenkritik” no less than ten times, while the German Phono Academy has awarded its “Echo Klassik” (recently renamed “Opus Klassik”) prize to six of their recordings, including the complete recordings of Schubert´s music for four hands and the complete Mozart piano duos. Other awards from outside Germany, such as the “Cannes Classical Award“, “Editor´s Choice“ by Gramophone and the “Supersonic Award“ reflect their high international reputation.

Since a couple of years Yaara Tal is publishing also solo recordings with SONY CLASSCAL.

Andreas Groethuysen was repeatedly invited to juries of national and international competitions and chaired several times the jury at the ARD competition for piano duo.

For many years Yaara Tal and Andreas Groethuysen concentrated their pedagogic activities on master classes in several countries. In 1995 the Japanese educational program of NHK produced a series of eight programs with them. In 2004 the duo started mentoring the master studies for piano duo at the Academy for Music and Theater in Munich. And since October 2014 Andreas Groethuysen is teaching a class for solo piano and for piano duo (master studies) at the Mozarteum University Salzburg.